Two Things, One Serious, One not so much.

Alright, two things today. First the more serious. I wold like to get more eyes on this blog, and more eyes on my various YouTube videos (channel right at the top of the page). Problem is, I have no idea how to do that. Does anyone? I would love any advice. I want to make people laugh, but you can't do that without an audience. This is not meant as a plea for help, or a cry for attention, this is just something on my mind I wanted to share with the good readers(or is viewers the right term) that I have. Thank you.

Now on to more usual schitck...

The Halloween time has stirred up some thoughts on horror. Not only horror, but fantasy and science fiction as well. These all being genres associated with Halloween to varying degrees. All get a bit of a spotlight on them for the month of October. 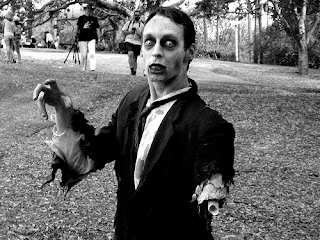 While on the subject of zombies, do the cognitive abilities of a zombie degrade over time? When first risen, or turned, is a zombie at its peak? Or does it become better with age? Is a zombie more like beer or wine? If zombie are made by some kind of disease or infection, are some people more resistant than others? And would natural mutations lead to different breeds of zombie?

Has there ever been a medieval fantasy in which the adviser to the king wasn't corrupt? Seems like adviser, consort, vizier, or whatever, is not just corrupt but grossly corrupt. Shouldn't there be some screening for this kind of job? To work at a retail store you need a back ground check and a drug test, shouldn't someone with the ear of the king get at least the same treatment? Or are all of them just political douchebags that got where they are at with bribes and ass kissing? Seems like some tighter standards should be held by kings.