Been trying to find some PSP (Playstation Portable) games I missed at the time. This has two problems. First finding a shop that still sells them at all. Second, the prices they want are getting ridiculous. One game I was trying for was Persona 1, the PSP had a remake of it. At one shop the clerk says they had one that sold for 17$ back in August. That price seemed good, just need to wait. Then the clerk says "that if they get another copy it would be 120$". How does the price of a used game go up 100$ in two months?The demand for PSP games cannot of spiked that much.

Mean while I am looking for a joy-con alternative for the Switch. I have the Hori Split Pad Pro, and that great for most handheld mode gaming, but some games require gyro control and they don't have that. With joy-con drift being a thing, I don't want to use them at all. I see many options on Amazon, but I have no real way of knowing which are good, or even really have a gyro for motion control.

Posted by The Offender at 9:28 PM No comments:

Trying to get subscribers on my youtube. No idea how to go about this. Googling it did not help.

Someone said ,more uploads help. So a while back I started doing two videos a week. Saturdays are for reviews. Tuesday is for everything else. Got a few more, but not nearly enough.

I dream of getting paid. Not looking to get rich, just would like a trickle of cash. Wouldn't turn down more, but know it isn't realistic. Getting to that 1000 subscriber mark is hard.

Posted by The Offender at 9:10 PM No comments:

Mayflash F500 and a Magicboot

So I bought this: 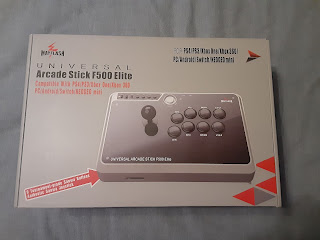 I bought this along with a "magicboot" to use with my Xbox One. I did this because of the lack of options for Xbox compatible arcade sticks. I would have preferred to only have to order one item, but that simply wasn't an option. So I have basically made a makeshift Xbox Arcade stick.

This stick usually works by plugging an official controller into via usb. Doing so will let it work with almost anything. However, having another controller tethered to it at all times is both awkward and cumbersome. The magicboot plugs into the same usb port and takes the place of the other controller.

This works well, and is a quality stick. I plan to get a bat top for it, and get some art going. Very happy with this.

I do still want to get a stick for the PS4. I could buy a second magicboot, only in playstation flavor, but I dislike the idea of switching them around. Debating between the Qanba Pearl, and the Hori Real Arcade Pro N. Not sure which direction to go.

Posted by The Offender at 8:26 PM No comments:

I would like to get one. Even Microsoft's own store doesn't have them. How does your own store not have them? It is getting close to a year since release. Seems like these should be a bit more common place by this point.

It is not a real problem, many worse things in the world than not having a new toy at hand. Still, I am a man that loves gaming. I don't care what on, hand me a fancy calculator and I will figure a way to game on it.

On several resent game purchases I see a tag letting me know that it contains both an Xbox One and a Series X/S version. I am curious to see how big of a difference it will be. I assume it will vary from game to game. Resident Evil Village will likely have a noticeable difference, while I doubt there will be much to notice on Saints Row the Third.

Some 360 and original Xbox games are also said to be enhanced, but I have never owned a 360 as I didn't have the money for one at the time. Still I have a collection of 360 games due to the backwards compatibility of the Xbox One. Backwards compatibility was the main reason I got an Xbox One, to play the 360 games I had missed.

Posted by The Offender at 11:20 PM No comments:

It seems like ever since RE4 that the games get easier rather than harder as you progress. This seems like bad design, but there is nothing that can be done about. You gain power as you play, but the danger level pretty much stays the same. You start out with just a pistol and very little ammo. So you find more weapons, and you find more ammo. Then you can upgrade your weapons, so each round of ammo is more effective. As long as you are not careless with your shots, you will soon have a huge surplus of ammo. There is no good way to balance this. You could make enimies take more bullets, but that is tedious. You could limit ammo more, but that would lead to unwinable states. Capcom claims the games adapt difficulty to your playing, but that doesn't seem to mean a damn thing. Not complaining, just seems odd to me,
Posted by The Offender at 8:51 PM No comments:

Don't worry, they are still coming on schedual. Finding a game to review is easy. Just go in my collection and pick one. What is hard are the other kind of videos I do. Videos that require more than just a game, but something that is more specific. "Worst Parts of Great Games" is hard to make. As first the game needs to be "great" and second it must have something in it that is either very out of place, or does something to ruin the experience. Depending on the nature of what it is, it might be hard to capture footage. What if it is at the end of a long game? What if it is a glitch that is somewhat common, but not a near 100% chance? Can mean days of effort for a few seconds. There are videos I very much want to make, but require an investment of 60 hours of game to get to what I want. "Delisted" is a problem too. As I need to have a copy of something that is no longer available. Even with a large collection, that can still be a challenge. Worse, is find information on why it was delisted. That might not exist. Sure there are other things to be said, but I would like them to have something other than pure editorial. This is a challenge. I need to find more content to make for Tuesday videos. Saturdays are easy, they are reviews. Tuesdays are hard, they are anything else.
Posted by The Offender at 8:43 PM No comments:

Final Fantasy has a problem with names. First character rarely have real names, and at best have names that could almost be real. It is not just characters, it is spells and items too. It seems to get worse as time goes on.

In Final Fantasy 7 we had the character "Aeris". Its not "Aeris" any more, now it is the even worse "Aerith". Now back in 97, when the game was first released, I assumed "Aeris" was meant as pun, or hint as to what she was. "Aeris" was the last of her kind, or an "heiress" to her almost forgotten legacy. Once changed to "Aerith", now it is just a gibberish made up name. So it goes from being almost clever, to nothing.

Then there is how the names of spells have changed. In the early games it was simple and logical, "cure 2" was more powerful than "cure". "Fire 3" was more powerful than "fire" and "fire 2". That stopped at some point. Now it is "Fire" followed by "fira" followed by "firaga", and so forth. It is all just gibberish. Worse as remakes and ports have been made, the older games get retrofitted with this nonsense.

Not all things get worse with time, something just start terrible. In Final Fantasy 8 your characters work for something called "SeeD", that is no typo they put a capital "D" at the end of it consistently. I remember a group of gamers debating how to pronounce that. Was it just meant to be "seed", or was it meant to be pronounced "See Dee". This was shortly after release, so none of them had finished the game yet. So some of them thought that might be a hint that "SeeD" was up to no good, like they were a "seedy" organization.

It is odd that Final Fantasy has this problem, but other franchises from the same company don't. Dragon Quest doesn't suffer this. Sadly, I know it will never stop. and will just get worse with time.

Posted by The Offender at 2:35 PM No comments: