It seems to me that antiabortion people shouldn't be trying to stop abortion. Rather these people should be trying to engineer and prefect "re-bortion" technology. This could solve the problem and make everyone happy.

What is "re-bortion"? It is the opposite of abortion. Once an abortion has been preformed, a second willing woman would then have the fetus "re-borted" into her, thus preventing any issue people might have with abortion.

"Tales of the MFer", coming soon.

So there was a guy a knew back in the day. He was a truly terrible person. I won't use his name here, instead he will only be refereed to as "The MFer". Sadly, there is a ton of material that can be used.

I am in no way in a position to diagnose psychological problems. I have no level of expertise in that field or any field related. However, I think "The MFer" might be a sociopath, not a violent one, as I never knew him to admit wrong, or have any understanding of why anyone was upset at him.

One might wonder why I have so many stories about him, why I stuck around him for any length of time. Well two things, one his mother was a very nice woman and was aware of what her son was, and two I kind of felt bad for him and hoped to help him. Sadly, there was no helping him, he was willfully a giant douche.

There will be many parts to this series, as there is a depressingly large amount of material to pull from.

Posted by The Offender at 10:03 PM No comments:

What do you call this?

Is there a term for a game that is very much like a "Legend of Zelda" game, without actually being part of that franchise? There are whole separate franchises that are like this, "Okami" springs to mind.  There however seems to be no single term that describes this.

Games which are "Zelda-like" are, but are not limited to, "Darksiders", "Recore", "Okami", "Beyond: Good & Evil". These games all feel so very much like "Zelda". They all involve progression based around exploration and the attainment of items of one sort or another. In these games every thing found allows greater access to the world in some way, might let you pass a barrier, might allow you to damage a formerly invincible foe. Often reward are there to be found if you backtrack with what you have newly acquired.


The lack of a term for this phenomenon just struck me the other day, and it seems odd for the amount of time this has been happening. The first "Zelda" game came out in 1986, the first game to be "Zelda" without the name was also 1986.  It just seems we could use a simple term for this in gaming.
Posted by The Offender at 7:00 PM No comments:

Got this in the mail. 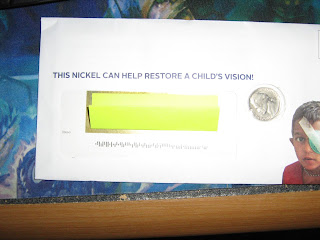 So, why the hell are you sending me a nickel, rather than helping a child?

No just that, but this is more than a standard letter, the postage on this would have been expensive. Seems like the cost of this could have been broken down in to many 0.05$ sections to help many children.
Posted by The Offender at 10:03 PM No comments: