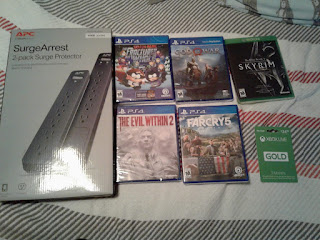 Not the biggest haul, but respectable.
Posted by The Offender at 11:30 AM No comments:

While I was in a waiting room a child asked me what school was like. He was going into kindergarten, and wanted to know what to expect. I was first surprised that a child so young would approach me being large and bearded, but secondly rather at a loss for what to tell the child about k-12 public education. The boy's mother came up and got him before I could answer, she seemed worried, but the child was in no danger. Since then I have tried to think of a way to describe k-12 education, here are a few of my thoughts.

If I were to be bluntly honest, I would say school is 7 to 8 hours a day of psychological torture and emotional abuse. Most actual learning will be done alone on your time, and teacher will serve only to get in the way of the process. I guess the teachers are mostly acting as an obstacle so they feel like they earned their paycheck. This is clearly not something to tell a child, so perhaps speaking more symbolically would help.

School is basically a raping of the mind. Only when you don't enjoy being raped, you are told it is "for your own good", and that you will "look back on it fondly someday". Gang rape might be more accurate, do to the fact you will deal with many teachers over your time in school. Here again, I think this might be a bit much to tell a child. Maybe something the child could relate to would help.

Ever watch "Tom and Jerry"? Well in school you will be Jerry, and the teacher is Tom. Only Tom never gets any comeuppance. So... basically just "Tom and Jerry" if Tom won. This feels about right, but the child might think you were talking down to them.

School is like if you saw a vast forest, and in that forest was someone tryong to cut down the trees with a sledgehammer. And when told that a saw or axe would work better, that person treats you as if you have just spoken blasphemy. In this the students are the trees, and the teachers are holding the sledgehammers. This gets across the unpleasant nature of the experience, while also hinting at where the root of the problem lays.

Posted by The Offender at 8:22 PM No comments:

Yes it is veteran's day. Normally I wouldn't comment on that here. However, after last week, some people asked if I was a veteran. No, no I am not. I have never served, and have only respect for any person that does/did. To them, I say "Thank you for your service".


Some people have also asked if reporting a troll for stolen valor was an over reaction. To them, I say I did my duty as a citizen. No one forced him to masquerade as a soldier.
Posted by The Offender at 3:29 PM No comments:

Dealing with a troll.

I used to go on a little forum. I was invited there by a friend. However it was not my kind of place, it was not a fan forum it was instead a "fanboy" forum. Specifically, it was for the Final Fantasy series, with most of them only interested in the 7th and 8th in the series, no accounting for taste.

This was not a great place to go. It was the kind of place that treated any opinion that varied from the majority as trolling. Sad to see a place like that. So after much harassment, mostly by the staff, I decided to leave and let them have their little safe space. However, I guess that wasn't good enough as one of them thought it was a good idea to continue the harassment off of their forum. This anger little boy made a big mistake.

So to take care of the situation, I warned him that there would be consequences to his actions. He continued despite my warnings. So as he likes to boast of being a soldier, whoever, he has never actually served in any military. So I reported him for stolen valor, which is a felony. I then went down to the local veteran's bar and got the real actual soldiers worked up, and many of them reported him too.

Well, I feel better about the situation.
Posted by The Offender at 8:38 PM No comments: