Before we start, I am not getting paid for my this by 8Bitdo for my thoughts on their product.

Recently, I picked up this controller at Fry's Electronics for 50$. 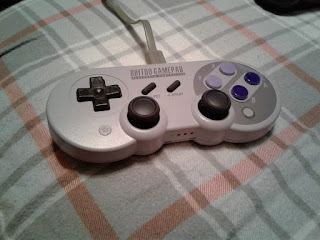 The short version: It is easily the best controller I have ever used for 2d games. It is also a fine controller for modern 3d games.

The long version: This controller has a lot going for it, both tangible and intangible. Making for a controller that not only feels good in the hands, but is also make you wax nostalgic.

Firstly the contoller can be used on multiple systems, both wired and wireless (through Bluetooth). There are botton combinations printed on the bottom of the controller for quickly switching between systems. Windows, Mac OS, Android, Nintendo switch, and Raspberry Pi, can all be easily be paired to this controller.

The build quality is very good. The buttons feel good, and continue to feel good even after several weeks of heavy use. The d-pad has a very definite feel to it, with a proper pivot. The analog sticks are very precise, and work well for any modern game might play. The plastics used seem to be at least somewhat resistant to the natural oils of your skin. It has built in rumble motors, and motion controls that both work very well. The batteries last about 16 hours on a charge, and can last longer if you are using it for something without rumble support. It also has built in turbo for the buttons, which while not very useful in modern games, can be very useful when playing older retro games.

This controller tries very hard to invoke nostalgic feeling.  It is designed after the standard controller of the Super Nintendo, only with twin analog sticks, and an extra pair of shoulder buttons. This is taken further, as the plastics used are textured to feel the same as the ones used by Nintendo for their SNES controllers. The buttons also have the same height and resistance. Meaning that if you spent a lot of time with an SNES, you will undoubtedly be very fond of the SN30 Pro.