Least likely characters to ever be in Smash Bros

Sure, more fighters are coming. However no matter how many they add some will just never make the cut.

Popeye. Nintendo has a lot of history with Popeye, he was launch title for Famicom. Somewhere along the way Nintendo lost the license to make Popeye games. So despite some history together, he will never join the fight. Shame too, as he could easily be an alternate for Little Mac.

Will from "Illusion of Gaia". Enix, when they were their own company, made a lot of interesting games. Most of which aren't much remembered today. This Zelda-like game is no exception. He had a flute and could take on the form of a boy, a knight, and a being made of blue flames. This could make for an interesting fighter, that will never be in Smash.

Any character from a Rockstar game. GTA, Bully, Manhunt, Red Dead, any of the protagonist could make for great fighters. Sadly Nintendo doesn't have much of a relationship with Rockstar, and likely never will. Seems odd the GTA game haven't made it to Switch, and it is too late for them to be on 3ds. Last time they had a game on a Nintendo console was Bully on the Wii. Guess that makes Jimmy Hopkins the most likely to show up, and that is still an extreme long shot.

Shodan. The antagonist of System Shock 1 and 2. While these games get more love today than they ever did when they came out, they are still rather niche. Also, not sure how you make an evil artificial intelligence into a fighter exactly.

Gordon Freeman. If Valve isn't going to do anything with him, what chance does Nintendo have?
Posted by The Offender at 1:36 AM No comments:


Above is footage of my beating of the final boss of Sekiro.

I didn't enjoy this game very much. It is not a poorly made game, it is simply not what I am looking for. I went in looking for a souls-like game, and that is not what was on offer.

My biggest problem with the game is that it gives you no real options in how to play. You will always have the same weapon, you have a fairly limited move set, and there is no equipment or stats to play with. So every fight will be tapping two buttons, one that attacks, one that is used for defense. Making for a bland and repetitive experience. This also kills any replay value.

Having a melee centered game is not in itself a problem, Bloodborne was similarly melee focused but game you a wipe option of weapons to choose from all of which made you play differently. While every option was still melee combat, you still had a choices to make, power or speed, and it wasn't a binary choice as there were options that were in various parts of the middle.

A lack of stats and equipment really hold this game back. As the RPG elements of Dark Souls and Bloodborne are what make those games shine. That they are action focused games that still allow for a huge level of customization, and endless option for how to play. What armor works for you, do you use different pieces for different situations? Do you spend all your level ups to get a longer life bar, or do you focus on your attack, or on some other aspect entirely?

Do you like having the same experience over and over again? You can start the game over once you finish it, but it will be the same as before. The bosses will have a few more hit-points, and stronger attacks, but the way you will fight them will be the same, might just take a little longer this time.
Posted by The Offender at 8:50 PM No comments:

Merry Christmas.Happy Holidays. Or whatever the current version is.

It is so nice that this shit is almost over. The stores will go back to normal. People will start acting... well less terrible. Things will in general calm down. Well almost. There is one place things won't be calm at for a week or two still.

That place is the return counter at stores. While the stores have calmed down. The return desk will be clogged. People returning gifts they received. Most of who are pissed to be standing in line.
Posted by The Offender at 7:36 PM No comments: 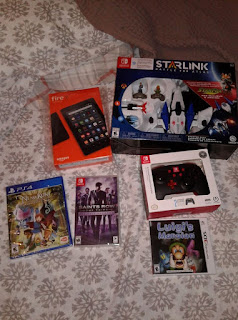 Posted by The Offender at 8:01 PM No comments:

I might be the first to say Thanksgiving sucks, but I have never said we should ski it. Retailers, feel otherwise. Why have a day off to rest, when you can go to a store and get in a fight over a slightly better sale than usual?

Retailers have been starting earlier and earlier each year. The last few years retailers started opening Thursday night around 8pm or so. This year some are opening as early as 5pm on Thursday, meaning the sun won't even be down yet.

All I ever wanted to do on Thanksgiving was NOTHING. I never wanted to see any extended family. I don't like turkey. I just want to take a real day off. Wake up, hangout in bed watching TV or maybe Youtube these days, eat something good, nap, shower, call it a day. But instead as a kid, I had to go eat a terrible meal, with people I hate. Sure, I could just stay home, enjoy a day of rest, but I do like deals.

So yeah, I will end up shopping. Not for any "door busters" those are a fools bet. Instead I will be after the usual stuff that just happens to get a good discount. At the end I won't be rested, and the next day everyone will wonder why I still look like I need a day off.
Posted by The Offender at 8:08 PM No comments:

Target sells raspberry pi computers now. It is a weird sight to see. Just feels out of place. Not just in "educational" kits either.

You can get the pi, various cases, the power supplies, on/off switches, etc. Literally all everything you need to get one up and running. These can be bought ala carte, or in bundles.

However, you can't buy anything other than the basics. No where to be found are the various add on cards for the pi. Nor is there any of the items needed to make a pi more than a toy.

Still, kind of cool, but weird.
Posted by The Offender at 8:22 PM No comments:

The Outer Worlds is an open world RPG FPS developed by Obsidian. It is currently on Playstation 4, Xbox One, and PC.

The game is overall very good. It is however rather short, taking less than 40 hours to complete. If you are a fan of the modern Fallout games, you will definitely enjoy this game. That is the short of it, it is good, from here on there might be spoilers, this is your only warning.

The story is not overly complex. You are saved from suspended animation aboard an abandoned space ship by a mad scientist. The scientist wants you to help save all the other people from your ship still trapped, and save the colony that you will be having adventures in. Of course you can get through this a number of ways, being helpful, being greedy, being a complete asshole, and many other options beside, all depending on you and your play style.

The world is slightly different than most open worlds. As the game takes place on several worlds that you can freely travel between. So rather than one large sandbox, you are given a series of relatively small sandboxes. Most of them have a few quests do. Oddly despite being different worlds, many of them have the same wild life.

Your character progression has some twists too. You gain level as you might expect, but you then put points into categories that give you improvements to multiple skill, to a certain amount. After a certain point, you must then level up each skill individually. Lots of varibles effect your skills, nearly every piece of equipment will modify your skills in some way, and the NPCs you choose to take with you in your travels will also effect your skills.

The NPCs are well voice acted. The ones you get to follow you will give you bonuses. Each one also has a very short quest. Some of them are better written than others.

The gameplay takes several forms. Out in the world you are mostly shooting things. In towns you are mostly talking, and in nearly every conversion you will find a way to apply one of your characters skills, assuming the skill in question in high enough. You get quest, you turn in quests, you get experience, and maybe another piece of the story.
Posted by The Offender at 8:44 PM No comments: